On September 3, our new students started their 4-month journey to become professional software developers.  We’ve used the summer months to reinvent ourselves: Same same but different!

Until now, we’ve trained and coached a group of motivated soon-to-be junior developers for one specific client. Integrating several junior developers into your software teams requires a decent-sized IT department. In order to serve some smaller organizations, we’ve introduced our mixed class: Several students from different organizations learning together and cross-pollinating each other.

After successfully training people to become junior Java developers, we designed and started our .NET trajectory. Our soon-to-be junior developers will be introduced to the world of C#,  a back-end in ASP.NET Core, Microsoft SQL Server as database and a front-end written in in Angular. This means not only new students in the classroom, but also new trainer-developers! 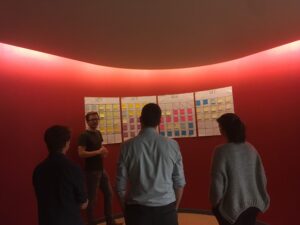 We’ve moved! We needed a central location to organize our four-month training trajectories and we found one: BeCentral. BeCentral is a new digital campus located in Brussels Central Station, with a mission: Closing the digital skills gap.  Moving here was a no-brainer for us; the mission, the location, the presence of other code school, like-minded people, ….

Best of luck to our students and trainer-developers!

Do you need more info?

Kept scrolling, did you? Maybe you’re searching for some more information? If that’s the case, just get in touch. Send us an e-mail or book a meeting, just reach out to us with any questions you might still have. We’re happy to reply!

Sign up to our monthly newsletter for useful articles, tips and tricks to start your new career

Switchfully - An initiative powered by Cegeka